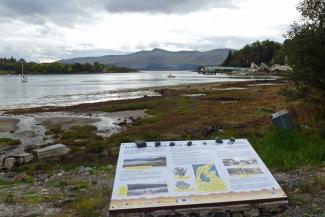 Take the road to Lochaline on the Morvern peninsula to explore ancient metamorphic rocks, Triassic sandstones, basalt lavas and pure white silica sands. Take a fossil excursion to discover an ancient marine mollusc that lived during the Jurassic period.

The key geological sites associated with this trip are located in the vicinity of the small rural village of Lochaline, situated on the north shore of Loch Aline. However, as you travel south along A884 you will have an opportunity to see exposures of granite, Moine psammites (metamorphosed sandstone), mica schists (metamorphosed shales) and Triassic sandstone. You will also have good views of Gleann Dubh (the Black Glen), where mining for lead took place in the 18th century, and the Gleann Geal (the White Glen).

To access the Morvern peninsula, take the A884, approximately two kilometres east of Strontian, and follow the road south to Lochaline.

As you enter the village of Lochaline, there are some good views of the ‘trap topography’ produced by repeated lava flows, on the east side of Loch Aline. These are best seen from the information board by the ferry terminal to Mull, which is the first stop on this geological excursion.

Park in the village and head towards the ferry terminal and cafe, where you will find an interpretation board overlooking Loch Aline. The interpretation board is produced by The Lochaber Geopark and explores the role of volcanoes, shifting continents and tropical seas in creating the characteristic geology and topography of Morvern. The board also explains how the local rocks provide evidence of past climates and long extinct marine species. This board sets the scene for a fossil excursion which also takes in the white sands of Lochaline.

For the fossil excursion, take the old low road by the ferry terminal at Lochaline, as signposted, just north of the Public Conveniences and Lochaline Social Club. The track skirts the loch heading towards Lochaline Sand Mine which mines a white sandstone bed up to 15 metres thick which overlies ancient Moine rocks. The silica-rich sediments were deposited in shallow seas during the Cretaceous period, some 130 million years ago. The silica sand is extremely pure and used in high grade optics and glassware, solar panels and abrasives. Massive piles of the sand can be seen being extracted, processed and dried as you walk by the side of this working sand mine.

Continue along the shoreline track until you sight Lochaline Harbour with its pontoons. Here there is another interpretation board produced by the Lochaber Geopark. The interpretation board provides a further insight into the workings of the Sand Mine, as well as the local geology of the area. This includes the exposures of Jurassic mudstone along the coast (Pabay Shale Formation). These Jurassic rocks contain fossils of Gryphaea (Devil's toenail), a genus of extinct oysters that lived in the tropical seas about 200 million years ago. A complete fossil specimen consists of a large curved shell and a small flattened lid. Scan the shoreline for these articulated fossil bivalves embedded in the sedimentary rocks or found loose on the beach. The latter have been washed out of the shales. Take time to appreciate these ancient benthic filter feeders that once rested on the Jurassic sea floor. However, please be sure to leave the fossils in-situ for others to enjoy.

You can turn back at this stage or continue on this lovely shoreline to the head of the Loch Aline. The walk provides some fine views of Ardtornish House, a baronial style Victorian mansion. On route you will also pass by a derelict lime kiln built into the hillside used in the production of quicklime during the 19th and early 20th century. Return by the same route.

A geological tour around Ardnamurchan