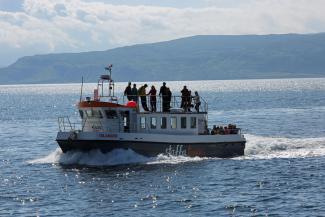 Ardnamurchan is a great place to embark on a Puffin Safari. Whilst puffins do not breed on the peninsula they do breed on several of the nearby Inner Hebridean Isles, such as the island of Lunga, the largest of the Treshnish Isles.   Staffa Tours operate out of Mull and pick up in Kilchoan in West Ardnamurchan offering a day long excursion to see both the puffins on Lunga and visit Fingal's Cave on The Isle of Staffa. There are also good chances of seeing dolphins and white-tailed eagles, as well as a host of other seabirds.  On Lunga, you will be amazed at how close you can get to the puffins affording great photo opportunities.  A trip to the islands of Lunga and Staffa is a 'must do' during late Spring and Summer.