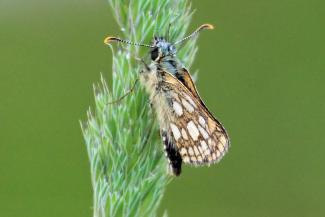 The Ariundle Oakwood National Nature Reserve, near Strontian, is great place to search for butterflies such as the beautiful and rare pearl-bordered and small pearl-bordered fritillaries and the West Highland speciality, the chequered skipper. Take the lovely walk through the ancient coastal oakwood, whose boughs are strewn with an exuberance of mosses, lichens and epiphytic ferns and carpets of bluebells in Spring.  Look out for the ubiquitous speckled wood in the canopy, fritillaries in the woodland clearings and the chequered skipper in damp grassland by the car park. The chequered skipper is on the wing during late May and early June. Listen out for the sonorous calls of summer migrants as well as the resident birds.  Although Ariundle Oakwood is a great place to visit at any time of year, it is at its best in late Spring and Summer.