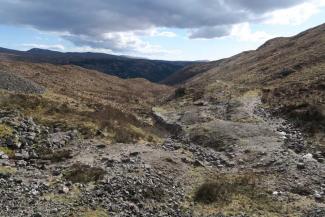 Take a rock safari to discover how a small rural village in the West Highlands gave its name to a lustrous whitish yellow crystalline mineral and a metal element that lights up the night sky.

Around 250 years ago, various minerals were injected into pre-existing fractures in the Moine schists around Strontian and Morvern. One such mineral was galena, lead (II) sulphide, which is the principal ore of lead and an important source of silver. The galena was discovered in the hills around Strontian in 1722 by Alexander Murray; this led to the opening of a lead mine in 1725. By 1730, the mining activity was at its peak employing hundreds of workers, with the mining of lead, silver and zinc.

The success of the industry reflected the unique composition and richness of the crystallised minerals of the veins. However, the mines at Strontian became famous for another ore; a 'new species of earth' was discovered by Adair Crawford and William Cruickshank in 1790. This rare carbonate mineral was given the name strontianite, (SrCO3), after the name of the village of Strontian. The element Strontium (Sr) was subsequently isolated as a new metal element by Humphry Davy in 1808. Strontium is an alkaline earth metal with atomic number of 38. This highly reactive silvery metal with a pale yellow tinge gives a crimson red flame colour. Strontium became widely used in the cathode monitors of colour TVs. More recently, isotopes of strontium have been used in catchment geology and archaeology, whilst the salts of strontium have been used in fireworks, the manufacture of hard ferrite magnets and luminescence toys.

Since the discovery of strontium, the mines at Strontian have experience mixed fortunes, with a succession of lead mining companies working the area. The five mines (Bellesgrove, Clashgorm, Corrantee, Fee Donald and Whitesmith) have been responsible for the extraction of numerous minerals and have also provided some fine harmotome specimens. The Strontian mines are also recognised as the type locality for Brewsterite, a series of tectosilicate minerals belonging to the zeolite group (micro porous almininosilicate minerals).

In 1983, Strontian Minerals Ltd, started mining for barite on an industrial scale for use in the North sea oil drilling industry. However, the mine was later closed. The area around the barite quarry was later quarried for aggregates.

There are also several walks around the Strontian area, some of which take in the local lead mines.

However, please be aware that there are many opencuts and shafts in the area which can be dangerous; you should not go near or enter any of these structure There are also occasional talks and tours on the Strontian Mines; please check on the event calendar on Wild About Lochaber for upcoming events. Local facilities in Strontian include a village store, post office, petrol/diesel, cafe, hotel, craft shop, picnic site and public toilets.

A geological tour around Ardnamurchan